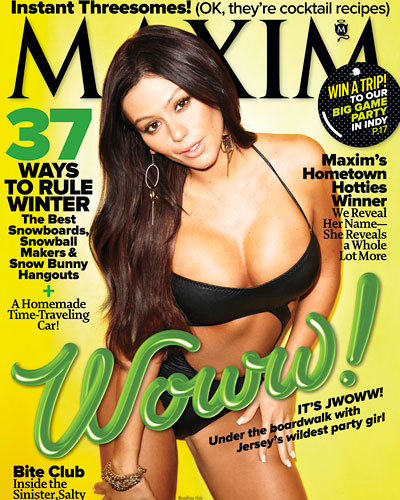 Jersey Shore’s Jenni “JWoww” Farley is the cover girl for the the January 2012 issue of Maxim.  This is her third time in it, first time on the cover.  She’s moving up in the world, isn’t she?  Naturally, JWoww flaunted her best assets… her rack for the shoot.  And yeah, she looks amazing, right?

Here are a few blurbs from the interview….I know you’re here for that.

So let’s talk about Italy.
It was insane. As everyone got to see, it was very dramatic. I’m glad we’re going back to the Shore now, because Italy was hard.

You guys were pretty isolated over there. You couldn’t escape each other.
We definitely had to rely on each other, which made our relationships stronger, but also made us more sick of each other. Temperatures were running high. People were fighting. Heads were hitting walls.

Was that scary?
Yeah. Even rewatching it is pretty intense! It’s very emotional, and I was there and lived it. But we’re fine now, and that’s the best thing about us. We watch it together and laugh at what we went through.

What was your favorite part of being in Italy?
You could put us anywhere, and we’d make a great show. But Italy was an especially amazing place for me, because I was an art history student. And besides the statues, I got to see the streets where, like, da Vinci and Michelangelo lived.

What do you guys think of the cover?  Does her face look a little “off”?  Sound off in the comments below!