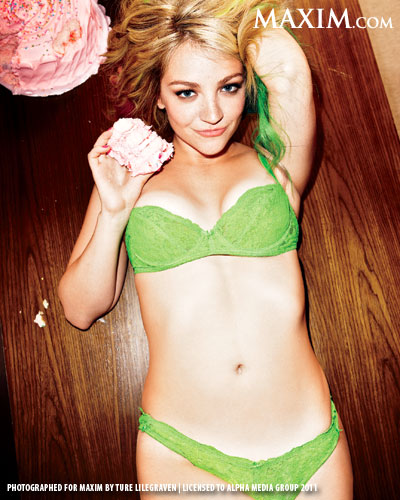 Who knew just how hot this Saturday Night Live resident really is?  Maxim, that’s who!  Abby Elliott brings the laughs every week on the late night show, but now she’s stripping down and chatting it up with the men’s mag.

Here are a few blurbs:

How old were you when you started?
I was 21. Thank God, because if I had been underage, it would’ve been so depressing. But it’s a lot tamer than in the old days. It’s the same cocaine schedule, but without the cocaine.

What’s it like when someone you do an impression of hosts, like Anna Faris?
I auditioned by reading The World Almanac in her voice! She’s friends with my dad and totally supportive.

You also do a pretty killer Angelina Jolie.
I’ve never done it in front of her, but I don’t think I’d be able to speak. She’s so beautiful.

Any other crushes?
Sienna Miller, Anna Faris, and Emma Stone. I love that I have a million girl crushes and can’t think of a single guy.

What about Jon Hamm?
Hamm’s a good one. Everyone has a crush on him. I have a big crush on Leo DiCaprio. I was a huge Titanic fan. Saw it eight times. If he ever hosted, I’d turn into my 13-year-old self and freak out.

Grab a copy of Maxim for the rest of the article!