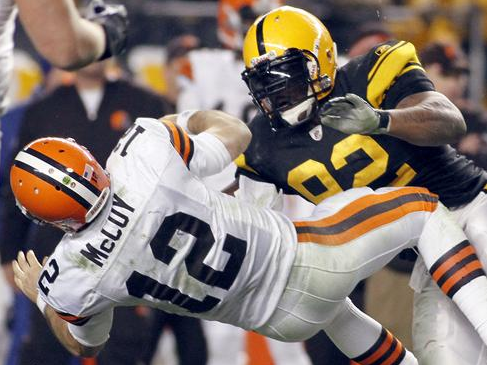 We knew this was coming.  But is it right?  Pittsburgh Steelers’ star defensive player, James Harrison just  received a one game suspension for his helmet to helmet hit on the Browns‘ quarterback, Colt McCoy, who suffered a concussion during the Thursday night match-up.

There has been a lot of talk about the whole thing, fans of the Steelers are of course calling BS, but surprisingly, so are a lot of non-fans.  What’s the big argument here?  The fact that McCoy tucked the ball and ran turned him into a running back and that made him fair game for that kind of hit.  But, unfortunately, Harrison has a “record” when it comes to “dirty” hits and that is why he’s being made an example of.  Does that make it okay?  I don’t think so.  I think it’s BS.  It’s not fair to bend the rules when you feel like it.  But the “new” NFL is full of BS and I personally get pissed at it every week during one game or another.

So how did head coach, Mike Tomlin react?  Here is his statement from the Steelers’ site:

“We received word from the league office this morning that he will receive a one-game suspension. We’ll accept that of course. We are disappointed, we are disappointed for James because we know quite frankly how hard he has worked to play within the rules. He has worked extremely hard to adjust his game. Unfortunately the incident happened. Of course it was a penalty. We have to be accountable for that; he has to be accountable for that. We accept the judgment rendered by the league office and we’ll move forward. Obviously the parameters are he can’t participate in any football activities with us this week. He will be allowed back in the building next Tuesday, the 20th.

“There is an appeals process. I don’t know what James’ intentions are. At this juncture I would imagine if he is going to do it, it will transpire pretty quickly. From a planning standpoint, from a coach’s standpoint, from a team standpoint the information we received this morning we have to prepare that he is not going to play. That is what we are doing.

How about Harrison?  How does he feel about this?  Well, first he said,

“I don’t think it’s suspension-worthy,” said Harrison on Monday following the team’s practice. “I don’t think it’s worthy of anything, but that’s just my own personal thoughts. They didn’t even call it helmet-to-helmet. He called it roughing the passer.  He took off running with it and at the last second he chuck-and-ducked,” said Harrison. “I knew if he wasn’t past (the line of scrimmage) he was awful close. I didn’t have time to look to the sideline to see. He tucked the ball and made like he was about to run and I was going to tackle him.”

Then after the suspension came in, he addressed his fans on his Twitter page saying:

“Thank you to all my fans and supporters, I’m just going to move on from here and get ready for my next game.”

That is much better that what we’ve heard him “vent” before, so I will take it.

Up next, the Steelers face the 49ers for the Monday Night game in San Francisco.  It’s going to be a good match-up, and Harrison will be missed.  But they’ve won plenty without him.