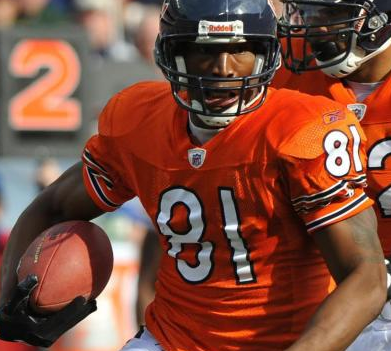 The hits just keep on coming to the Chicago Bears.  What Started out as a pretty good first half of the season has turned into an all out nightmare for the struggling NFL team.  They lost their QB, Jay Cutler to a broken thumb, then running back, Matt Forte to a knee injury, now, their wide receiver, Sam Hurd is in some serious trouble with the law, bringing some really bad press to the Bears organization.

Hurd was arrested last night after buying cocaine from an undercover agent.

According to the federal complaint, Hurd was arrested Wednesday night after meeting with the agent at a Chicago restaurant. The complaint contends Hurd told the agent that he was interested in buying five to 10 kilograms of cocaine and 1,000 pounds of marijuana per week to distribute.

After he bought the cocaine, he left the restaurant and was arrested.

The Bears gave this short statement:

“We are aware of Sam’s arrest and are continuing to gather details surrounding it. We are disappointed whenever these circumstances arise. We will deal with them appropriately once we have all the information.”

Honestly, what an embarrassment.  It seems like their is so much self-condemning evidence that I will be shocked if Hurd doesn’t get locked up… for quite some time.

We will keep you posted!