Camille Grammer and Her Bling 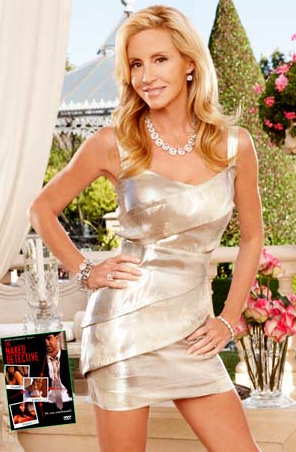 I am an avid “Real Housewives of Beverly Hills” viewer and one cast member I did not take a liking to on season one was Camille Grammer. She was completely dependent on her now ex-husband, Kelsey Grammer, and I got the sense that she was just a tad materialistic…imagine that for someone living in Beverly Hills.

But all of that has changed during season two, as Camille is now one of my fave housewives. I now view Grammer as an independent woman who is dealing with her situation in the best way possible considering the circumstances she went through with that piece of scum aka Kelsey. I have shared all of this with you because I am somewhat appalled at the fact that people would think Camille isn’t over her ex just because she continues to sport around a ring that he bought her for the couple’s five year anniversary. Give me a break!

A five year anniversary gift isn’t the same as if the single blond was wearing her engagement or wedding ring in public, which she told the Huffington Post “I have my wedding ring and engagement ring in a safe. I plan on giving them to my daughter.”

Geez let the woman wear her accessories in peace. She is clearly doing well and if you have tuned into any of the recent Beverly Hills episodes, you would know this. Not to mention the fact that she is dating a new man, Dimitri Charalambopoulos (try saying that one five times fast), who she seems to be smitten with. So why is this piece of bling causing such a controversy? It is just a piece of jewelry people! An expensive piece (10k to be exact) that I, too, would wear no matter who had given it to me. Ex or no ex that is one gorgeous diamond, why give that up?

Who cares if Kelsey moved on and married the first woman he spotted three days after his divorce was finalized. A gift is a gift is a gift…and this gift is a nice one.

According to the Huffington Post, Camille stated that she is completely out of love with her ex-husband and only wore the ring on a specific occasion. “I only wore the ring for the photo shoot,” Camille explained. “I did a photo shoot for Life & Style magazine and they had asked me to bring my bling. That ring is bling, along with other gifts that I have gotten from my ex over 14 years. I had acquired a lot of rings in my relationship. So whenever anyone asks me to bring my bling, that comes along with it.”

So there you have it – A perfectly innocent situation from a woman who was encouraged to bring her bling. No sentimental value seems to be associated with the ring besides for the fact that it is big, shiny, expensive and she enjoys flaunting it. If I were Camille, I’d be wearing that ring whenever I could, wouldn’t want it to go to waste sitting in my jewelry drawer. That is just silly!

Sarah is a regular TV and movie writer at Celebutaunt and can be found on Twitter at @sarahquesera.