Katy Perry Discovers What a Hot Guy SHOULD Look Like 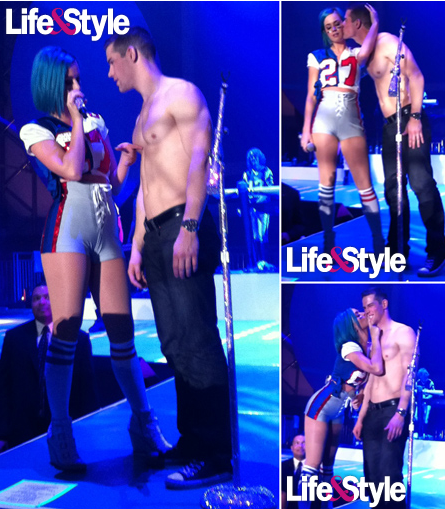 Katy Perry is a single girl now and well, it looks like her taste in men is taking a step in the right direction.  Let’s face it, Russell Brand is not hot.  Yes, some ladies find him sexy in a dirty, gross, somehow twisted way.  But Katy is going to have much better taste/judgement when it comes to men after this life lesson.

Katy rocked the DirecTV Super Saturday party in Indianapolis for the Super Bowl and that’s where she found Pete Lakoff… in the audience.  Katy said,

“I was wondering if there was any cute gentlemen that would take their T-shirt off for me.”

Pete’s friends hooked him up!  He told Life & Style,

“I was front row, and people took my shirt off for me. I didn’t take it off.”

Katy called him up on stage when she saw his hot bod…. them she gave him a sweet, long kiss on his cheek!  Then he jumped off the stage when she called him back up and demanded he return the favor.  Of course he did!

I am hoping they somehow exchanged numbers after that as well!  He’s HOT!