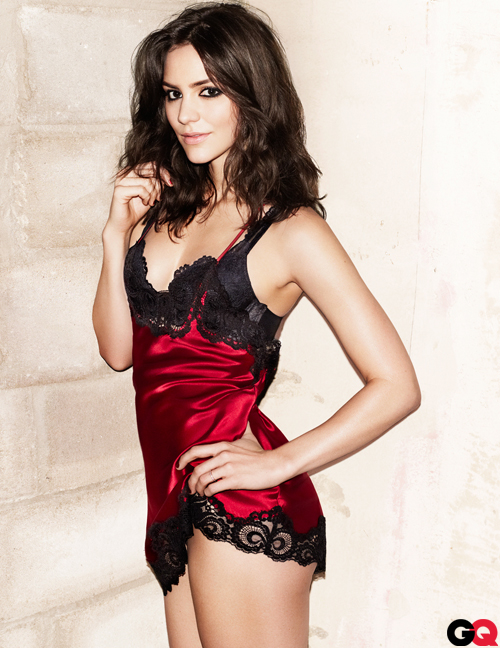 Did you check out Smash last night?  If not, you netter go season pass it on your DVR.  Need a good reason?  Well, our pals over at GQ are here to help with that.

Katharine McPhee (American Idol) is stripping down for the mag and well, giving a very convincing argument for you all to watch the show.

Check out the stripping video and her chat with GQ’s Devin Gordon:

When I tell McPhee how hard I resisted watching Smash, she laughs. “Yeah, this sounds very familiar. Like most of the other very straight men that I’ve spoken with.” As a penance, I tell her I want to help persuade more men to watch the show. Here’s what we come up with.

Reason #1: Your lady does it for you. Now do it for her. “Listen,” McPhee says, “I go see all the guy movies, so now I know I love them. But you have to be open to it. I would say to the girlfriends out there: Just nail him down, make him watch an episode with you.”

Reason #2: It’s not like they’re singing constantly. “I can understand why guys wouldn’t be into Glee. You know, that’s a pretty heavy musical show. That show does, like, six songs in an episode. We’ll do, at most, three.”

Reason #3: “Okay, how about this: What if I tell your readers that in episode five I take off all my clothes?” Sold! But hold on—would it be true? “I mean…no.” McPhee laughs mischievously. “But can’t we just say that?”

I couldn’t agree more!  I think that NBC finally found themselves a good show (that isn’t reality TV!)