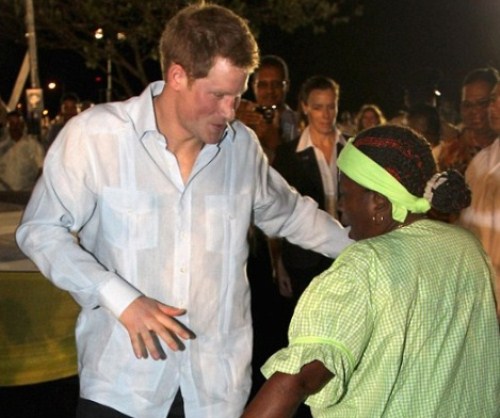 Recently graduated from his certification course as an R.A.F. Apache attack helicopter pilot, Prince Harry, The Prince of Wales is enjoying a weeklong trip to Central America and the Caribbean as part of Queen Elizabeth’s Diamond Jubilee.Harry appeared to be enjoying his time in the country of Belize last night as he partied it up after renaming a street after his 85-year-old Grandmother, Queen Elizabeth II.

The Daily Mail reports: Harry didn’t disappoint when he was challenged to show his dance moves by the city’s mayor, Simeon Lopez, who made a cheeky reference to his party-loving ways, saying: ‘I have been forewarned you are an outgoing person who is a good dancer!’

The 2,000-strong crowd erupted with delight as the Queen’s grandson reached forward to clasp the hands of local dancer Denese Enriquez, 36, and tenderly pulled her towards him, before expertly spinning her away.

The Apache helicopter pilot and his partner then continued to the accompanying reggae music. A delighted Miss Enriquez said: ‘He was just smiling and it was great because it looked like he was enjoying himself.

‘He was good and I guess I’m now a fan of his. The other dancers were probably too star- struck to approach him.’

Harry is in the Bahamas and will be in Jamaica on Monday.

The Daily Mail reports: “Harry is attracted to Pantanal because of the wildlife and how remote and private it is. He wants to relax after what will be a busy trip.”

Go for it Harry!