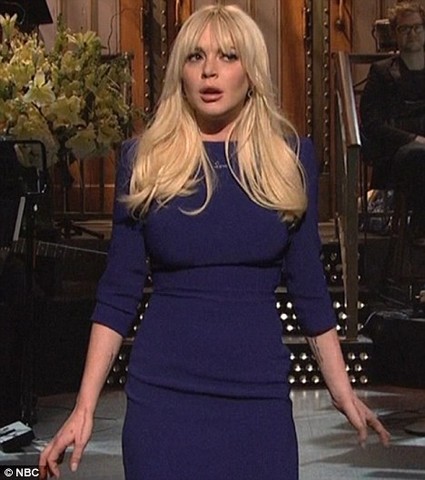 Last night’s episode of Saturday Night Live featured  Lindsay Lohan. She walked out on stage wearing a blue crayon colored dress, and a pair of blue shoes to match. Her monologue was quite funny and, despite what people, she does have some acting talent — she’s just struggling to locate it. She was a great sport and welcomed jokes, including a pat down by Kristen Wiig, that commented on her bad-girl past.

Despite her very noticeable teleprompter reading, her acting was admirable, especially after being out of the game for a while. I know many of my colleagues and peers will have (or had) negative reviews of Lindsay’s performance, but she needs our support and encouragement right now!   She definitely wasn’t the best host we’ve seen, but she seemed sincere in her attempts to bring a positive energy to the show.

We hope Lindsay can stay on the straight and narrow – she is off to a good start. You’re not quite all the way back in the game yet, but at least I have faith that you can get there soon.

If you watched SNL last night, what did you think of Lindsay’s performance?  Sound out in the comments below and let us know!