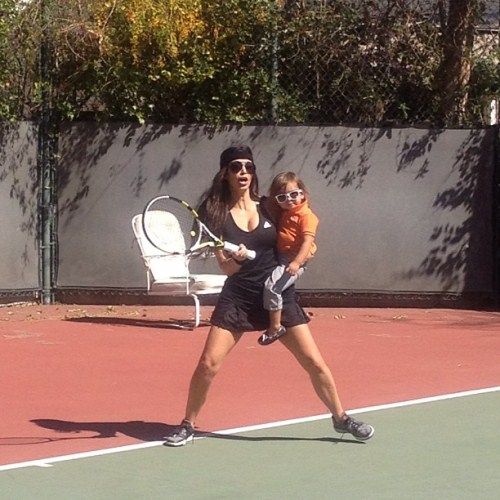 Despite the fact that Reggie Bush has rejected Kim Kardashian‘s advances and her heart is broken she continues to try to tempt Reggie with alluring photos.  Kim posted the following message to her twitter account with the tweet: “Mason wanted to play tennis too!”  We are suppose to believe that Kim plays tennis?

Although Kim and Reggie’s romance has been filled with ups and downs she is still desperate to reunite with him.  She had hoped that Reggie would take her back after the Kris Humphries debacle.  But so far that is failed!  Kim is not letting that get her down she knows that Reggie is not into all the publicity that usually surrounds her so she has been trying to avoid the spotlight.

What do you think, does Kim have any chance of getting Reggie back? Is this another desperate attempt of Kim’s to remind Reggie what he is missing?   Hit the comments below!