Snooki’s Ex-Boyfriend: ‘I Hope She Miscarries’ 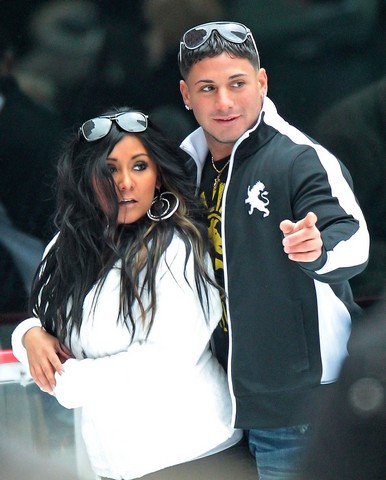 Remember when Jersey Shore had just premiered its season 2 and we saw a little bit of Snooki‘s ex-boyfriend who she said she ‘loved so much’. Well, he’s wishing her the worst of luck in her soon-to-be announced pregnancy, adding that he hopes she suffers a miscarriage because he’s pretty sure that Jionni LaValle is not even the father of the baby.

Emilio Masella dated Snooki (real name, Nicole Polizzi) for half a year before they called it quits on their relationship due to him being promiscuous while the TV-star filmed scenes in New Jersey for the MTV hit show. Masella has since spoke to many tabloid magazines stating that Snooki never wanted to have kids and being a mother at the age of twenty-four never even came to her mind.

“I hope for her sake… not to be rude or anything… but I hope she has a miscarriage. I would def recommend her to get a pregnancy test to see who the father is because I’m sure there are other subjects…Vinny [Guadagnino, her Jersey Shore co-star] could easily be the father. [She is] going to have the baby and break up with him right after.”

Jenni ‘JWoww’ Farley and Snooki are currently filming their spinoff show for MTV who went into crisis mode when they found out Snooki was pregnant. The show will not follow the lives of JWoww and Snooks get wasted anymore, it will instead focus more on Nicole’s pregnancy and she actually copes with it.

Will you be watching?