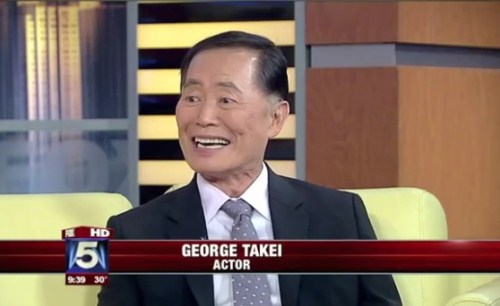 George Takei disagrees with Donald Trump because George felt his team won the competition on Sunday.  So while George may have the respect of The Donald he still got the axe.  Facts are that the best and brightest often get the boot from “Celebrity Apprentice.”

It is often dishonesty and treachery that prevail over intelligence and honesty both on the show and in real life.  The message one gets from the show is that the business world is infested with rats.  If one possesses the traits that one would want in a friend then one gets eaten alive in business.   Occupy Wall Street?  No way, too many rodents there!

Huntington Post Reports: “To be respected and to be fired, isn’t that a great combination?” the “Star Trek” actor asked Rosanna Scotto and Greg Kelly when he stopped by “Good Day NY” (weekdays, 9 a.m. EST on Fox). Takei got fired by The Donald after a challenge in which the teams were to show off Ivanka Trump’s latest fashion line with window displays.

The women and men each had two windows to set up living displays. “I still think we had the better window … it was 34th Street, our window was definitely 5th Avenue,” Takei said.

After agreeing with Takei, Kelly gushed to the “Star Trek” actor, asking him to sign his model of the Enterprise starship. “I’d be more than happy to, and I notice it’s above Bill Shatner,” Takei said with a laugh before wishing Kelly well with a “Live long and prosper.”