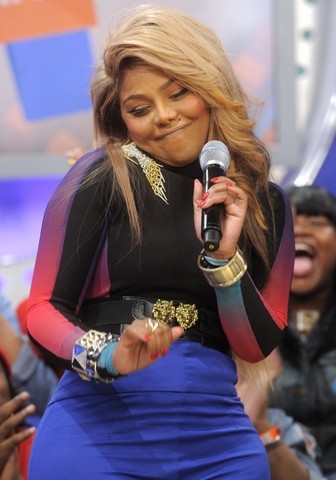 Lil’ Kim made an appearance yesterday on the show that was behind the success she had throughout the late 90’s. The rapper came out to 106 & Park – which airs on BET – to celebrate the life of her ex-boyfriend and close friend, Notorious BIG who had passed away on the 9th of March, 1997 (15th anniversary) in a shootout whilst leaving an award show in Los Angeles.

Although Kim had the audience going crazy as she came on the stage, she admitted to feeling disresepcted by the host, Rocsi who felt it was important to talk about the ongoing beef Kim has with Nicki Minaj which started around two years ago. Whilst Kim has already let the matter go, Minaj has been continuing the feud with her latest single, Stupid Hoe which she aims at the rapper, adding: ‘I’m Angelina, you Jennifer. C’mon, b****, you seen where Brad at?’

After the interview had aired, Kim took to Twitter to address her opinion towards the comment that was made:

“I want to take this time 2 say #TeamLilKim & all my fans that came out 2 106. I f***ing love u guys. Y’all really turnt it up & represented. Even when Rocsi tried to get disrespectful towards the end & ask an unappropriate irrelevant question.”