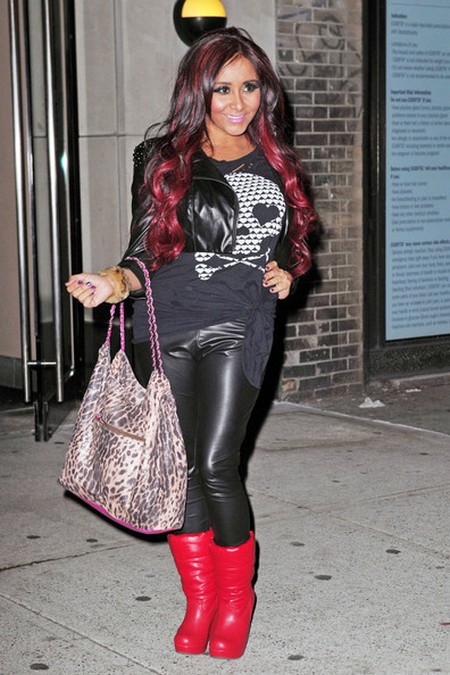 Snooki’s castmate and best friend Jenni ‘JWoww’ Farley and her fiancé Roger Matthews arrived with a large box – believed to be containing a cake – in tow, while her parents, Andy and Helen Polizzi, brought a bouquet of flowers, a balloon reading ‘congratulations’ and various other gifts with them.

Despite her parents’ apparent joy at impending grandparenthood, the 24-year-old reality TV star – who has been dating Jionni for around 18 months – admitted her dad was initially “upset” when she told him she was expecting a child.

She recently explained: “My dad was upset. He said, ‘You have your whole life ahead of you’. He came around eventually, and now he can’t wait for the baby. My mom is so happy for me.”

Snooki’s ‘Jersey Shore’ co-stars seem thrilled at the prospect of her becoming a mother.

Pauly D – real name Paul DelVecchio – said: “I’m real excited. I love babies! I love everything about them, when they’re not yours. So I’ll take care of it, spoil it and then when it’s crying, give it back to Snooki. She’s excited. She loves it. She’s always wanted kids. I want to be at the delivery room.”

However, her close pal Deena Cortese admitted she will miss her party-loving “partner in crime”.

She said: “I think Nicole is going to be a great mom. She’s a very genuine person and her heart’s always in the right place. She always puts people before her. This has been her dream – getting married, having kids. I’m going to miss my little partner-in-crime.”

Let’s hope that Snooki has complete success – she is no worse than many Hollywood celebs and in fact much nicer than most. I’m sure her marriage to Jionni LaVelle will last longer than Halle Berry’s to Olivier Martinez!