Wanted Criminal Jermaine Jones Gets The Boot From American Idol 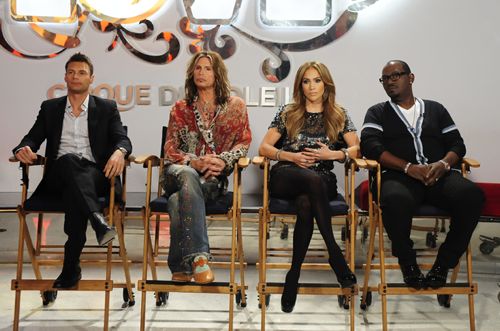 Looks like Jermaine Jones will not be the American Idol winner this year as producers of the show have learned that he is a wanted criminal. Jermaine has outstanding arrest warrants related to two arrests last year, one involving violence. Not the type of contestant Am Idol was hoping to promote.

Jermaine will be tossed from the show on TV Wednesday night – American Idol will no doubt achieve amazing ratings and future contestants will no doubt tell the truth to producers! Jermaine was hoist with his own petard after telling producers about being abandoned by his dad – but dad called up the show and labeled his son as a liar. Producers got suspicious and starting looking into Mr. Jones…

TMZ has the exclusive story:  Jermaine Jones will be kicked off “American Idol” Wednesday night, after producers learned he concealed the fact that he was arrested twice last years and has outstanding warrants … TMZ has learned.

As we first reported, producers discovered Tuesday that Jermaine had lied about his criminal history and that triggered the decision to confront him on camera Tuesday afternoon.

We’re told one of the incidents involved violence, which was particularly troublesome to producers. He also lied to cops by giving them fake names both times he was arrested.  “A.I.” sources tell us … Jermaine will appear on the show tomorrow night before he is sent packing.

Over the last few days, we’ve been reporting that Jermaine told producers his father abandoned him 10 years ago, but his dad called TMZ and called B.S. on his son, saying they see each other regularly.

Jermaine began tweeting that he never told producers about his dad abandoning him. We’re told the producers — who knew Jermaine had made the statement — became generally suspicious and began looking more closely at his background, and that’s what led to the revelation of his criminal history.