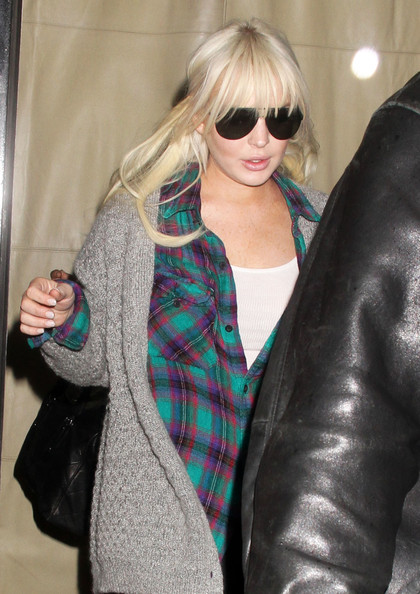 Lindsay Lohan was involved in a potential driving hit and run felony last night. Lindsay left the Sayers Club in Hollywood driving her new Porsche to avoid paparazzi when she managed to hit the manager of the nearby Hookah Lounge and his car! It seems there was not great damage done but that is not the point.

The point is that the manager now claims he was injured and if he files a police report the police will open a hit and run investigation and Lindsay will certainly be questioned. Was Lindsay drunk when she left the club just after midnight? Is that why she fled the scene? Any arrest now would be disastrous for Lindsay.

We will be following the case.

TMZ has an exclusive report: 6:06 AM: The plot thickens … Sources tell us, the club manager who Lindsay struck has gone to the emergency room and we’re told he is going to press charges and hire an attorney. Cops told us they will open a hit-and-run investigation if the manager files a report.

Law enforcement sources tell TMZ … the 26-year-old manager was standing by his car when Lindsay was attempting a 3-point turn and she grazed his knee and his car. We’re told the manager didn’t know who Lindsay was at first and he told the paparazzi on scene and police that he didn’t need medical attention. Cops say he was told the driver was Lindsay but he said he wasn’t from this country and didn’t know who she was. We’re told a short time later he began complaining he was injured.

TMZ spoke to an eyewitness who also says the manager was fine and actually “got up and started smoking his hookah.”

3:15 AM: Cops tell TMZ … they have investigated and determined no one was injured so as far as they are concerned it’s case closed. They added it could be reopened if the person struck contacts them later and claims injury.

Lindsay Lohan struck someone while driving away from a club, and then fled the scene … TMZ has learned. Lindsay was in her new Porsche when she left the Sayers Club in Hollywood at just after midnight Wednesday.

We’re told she was driving out of the parking lot when she was blocked by paparazzi and bystanders around the nearby Hookah Lounge. Lindsay made contact with the manager of the Hookah Lounge with her car and then peeled out.

Cops were called, came to the scene, interviewed people inside the Hookah Lounge — including the manager who was lightly struck — and then left.

We’re told Lindsay may have been the one who called police to protect herself from paparazzi, and that’s why cops came.

Sources at the scene say the manager may not have suffered any injury. If that’s the case, Lindsay probably did not violate any law, but if he was injured that could constitute the crime of hit-and-run. What’s more, it could be grounds to violate her probation in the shoplifting case.