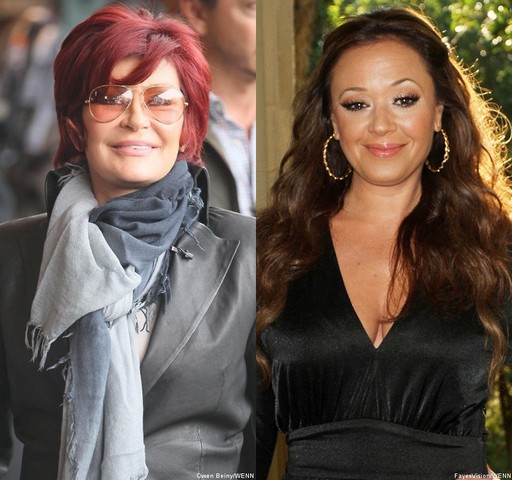 Leah Remini is making headlines after speaking to Howard Stern about being fired from The Talk alongside friend, Holly Robinson-Peete unexpectedly. The pair apparently received a phone call one day saying that they were not going to have their contracts renewed which left both of them puzzled.

Now, it seems that the answer has finally been found – Sharon Osbourne supposedly got them fired because she thought they were ‘too ghetto’ and didn’t have chemistry with anyone else on the show. But now Osbourne is speaking out and she doesn’t sound too happy that have been made about her.

Leah said earlier this week: “Sharon thought me and Holly were ‘Ghetto’, (her words) we were not funny, awkward and didn’t know ourselves… Sharon said she asked 4 us to be fired [on The Howard Stern Show].”

Sharon didn’t waste no time to hit her Twitter page and set the record straight. Not only did Sharon leave her statement of the story, she adds that Leah needs to move on and find something else to do rather than chitter-chatter about something that happened seven months ago: “I had absolutely nothing to do w her departure from the show & have no idea why she continues to take to Twitter to spread this false gossip.

Leah knows that I have never been in the position to hire or fire anyone on the show. That being said, my only wish is that Leah would just stop all this negative, unprofessional, and childish behaviour.” Osbourne added: “It’s been seven months. It’s time to move on. Leah is a very talented actress and I only wish her happiness and success.”

We have no doubt in our mind Leah is telling the truth (if you are in doubts, you obviously have not seen an episode of The Osbournes‘ reality show). The Talk was recently announced to be renewed for a third season after keeping up its ratings.