Prince Charles and Camilla Parker Bowles Are Getting A Divorce! 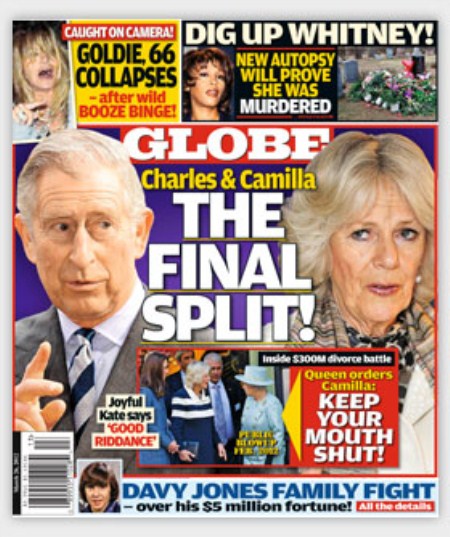 Globe magazine comes out with a big rumor this week that Prince Charles and his wife, Camilla Parker Bowles are headed for the divorce court.  If the divorce rumors are true, the couple will have to divide a fortune of 300 million dollars.

Globe has the scoop: In a world exclusive, GLOBE can reveal that Prince Charles and his scheming wife Camilla have finally split after seven years of marriage. And in a bombshell revelation, we’ve learned that Queen Elizabeth is involved in the top-secret divorce deal after a public spat with Camilla. Find out the shocking details – and why William’s bride Kate is thrilled – only in the new GLOBE.

There have been rumors for years that their marriage was in trouble.  Apparently carrying on an affair was far more exciting than being married.  The two got married in 2005 and it has appeared the two have been having a bit of a rocky patch for some time.

What do you think is the marriage of Prince Charles and Camilla Parker Bowles in trouble.  Hit the comments!!