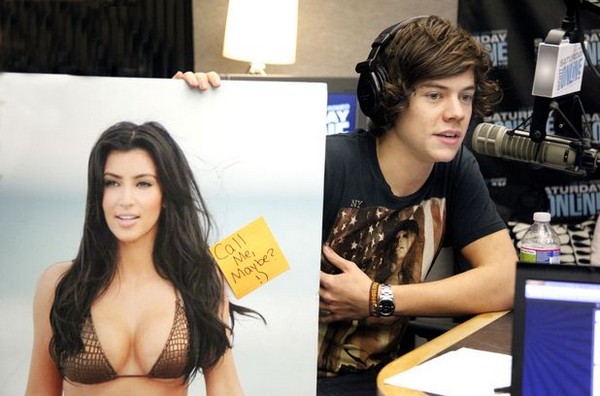 Even the British people in the UK are falling for the Kardashians. One Direction have made it very clear that they are head over heels for the Kardashians after appearing at a radio show to promote their latest album, Up All Night – which is to sell 160-180k within its first week of sales, according to Billboard officials.

Harry Styles who recently split from girlfriend, Caroline Flack made his way into the studio with his band mates whilst carrying a big poster of Kim Kardashian with a little note next to her head which read, ‘Call Me, maybe? ;).’ But Harry doesn’t stand alone when it comes to having a little crush on the Kardashians because band member, Niall Horan reached out to Khloe Kardashian, offering her and husband, Lamar Odom free tickets to one of their shows.

“OMG we would love to!! When and where?! LOL depending on if there’s a game we would love to come.” Knowing that the performance would clash with her schedule she sent out another tweet: “Ugh! Lamar will be playing out of town in Houston& I will be in LA but I come back that day. Keep me posted on the time wooo.”

Meanwhile in a recent interview, Zayn Malik added that the support they have been getting in the US has been totally overwhelming but at the same time surprising: “We thought it could be the same few hundred people tweeting us over and over again. Until we got to America, we didn’t realise how crazy it was.