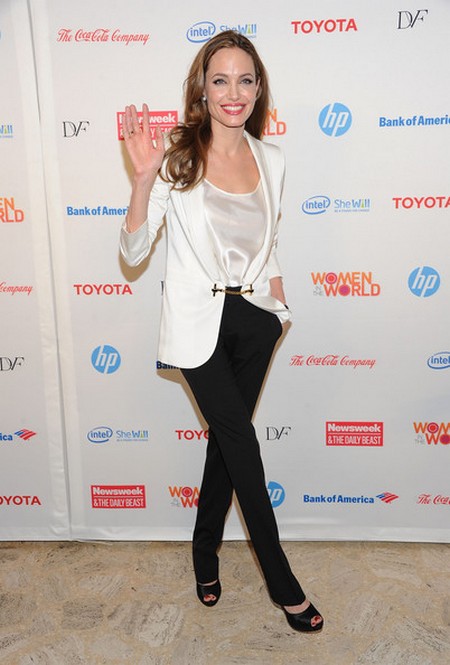 Angelina Jolie is going to have her brother James Haven conduct her wedding to Brad Pitt.  The couple are reportedly set to wed at their French home later this year after seven years together and are planning to have their family – including six children, Maddox, 10, Pax, eight, Zahara, seven, Shiloh, five, and three-year-old twins Knox and Vivienne – heavily involved in the ceremony.

Related: A Pregnant Angelina Jolie And Brad Pitt To Be Married This Summer

Brad was previously married to Jennifer Aniston, while Angelina was wed twice – to actor Jonny Lee Miller and director-and-actor Billy Bob Thornton.  You can bet that Jennifer won’t be invited to this wedding!!

A source said:   “It will take place in France because that’s where the family feel most grounded and also where they are afforded the most privacy.  Neither are religious, but they’re planning to have the wedding in the chapel right on their property because it’s just so perfect.”

“Angie originally planned to have her brother James [Haven] walk her down the aisle, but she’s now decided to let her dad, Jon Voight, have that honour since she knows how much it would mean for him and the kids.  James is an ordained minister, so they’re planning on having him actually marry them.”

“The plan is to have Maddox and Pax stand in as Brad’s groomsmen and Zahara and Shiloh will be bridesmaids. Little Viv will be a flower girl and Knox the ring bearer. Brad’s brother Doug will be their witness.”

The couple – who are said to have signed a prenuptial agreement to protect their respective fortunes – are planning for the ceremony to be “intimate” with only their closest friends in attendance.

The source added to National Enquirer magazine:  “Angie wants movie producer Graham King to be there because she got so close to him when they worked together on ‘In The Land of Blood and Honey’.  “Brad will only invite his closest friends – George Clooney, Quentin Tarantino and a few others like Matt Damon and Ed Norton.”

“It’s going to be the definition of intimate and super select, but make no mistake – this is super special and by anyone’s standard the wedding of the century.”

Happy days are here again.  We anxiously await this biggest of all Hollywood marriages!