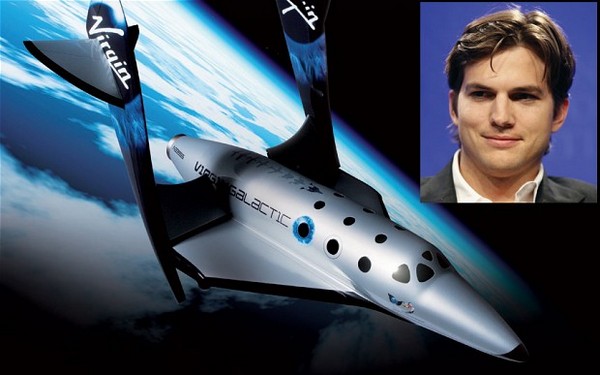 It seems as if Ashton Kutcher wants to get as far away from Demi Moore as possible and what better way to do it than go on a journey outer space? The Two and a Half Men star has signed on to join Richard Branson‘s crew and guests as they jet out to fly around the world in a luxurious spaceship – costing each passenger to cough up a total of $200,000 if they wanted to be part of it.

Branson who is close friends to Ashton took to his blog in the early hours on his excitement to have Kutcher on board and enjoy the experience. Richard added that the spaceship journey has not yet been finalized as it’s still in testing mode (making sure that everything is 100% safe) but continued saying if the first 500 people are happy with what they’ve seen, it will eventually be opened commercially for everyone.

“Great news today, news from our Astronaut Relations team at Virgin Galactic – our 500th future astronaut customer has just signed up! Even better news is that number 500 is Ashton Kutcher,” Branson wrote on his blog earlier this week.

“I gave Ashton a quick call to congratulate and welcome him. He is as thrilled as we are at the prospect of being among the first to cross the final frontier (and back!) with us and to experience the magic of space for himself. As you can see from the video, our spaceships are not only very beautiful but are built and flying in the final stages of our exhaustive test flight programme.”

Branson continued: “We are guided by safety and so will ensure that everything is just as safe as it can possibly be before we start commercial services – particularly as I will be on the first commercial flight with my kids!