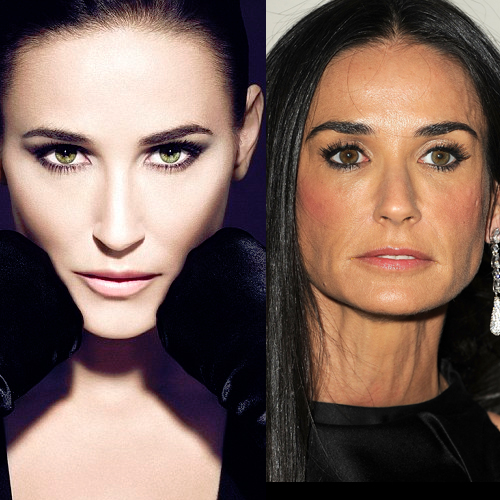 In a new ad campaign for Helena Rubenstein cosmetics, Demi Moore, 49, has been photoshopped so much you can barely recognize it is her.  Every single sign of aging has been removed.   When I saw the ad I said, ‘You is that?’ I was shocked it was Demi, it looks like an alien.

Life & Style picture editor said about the image: “The skin tone has been heavily airbrushed, with quite a thick application of the brush.   Doing this gets rid of all pit marks, pores, moles, blemishes and fine hairs on the face to create a smoother look.  She looks quite unlike her usual self. It’s a slightly alien effect. When you start taking away people’s skin tones and smoothing out their features, they look like mannequins. You’re removing the human elements of the face.”