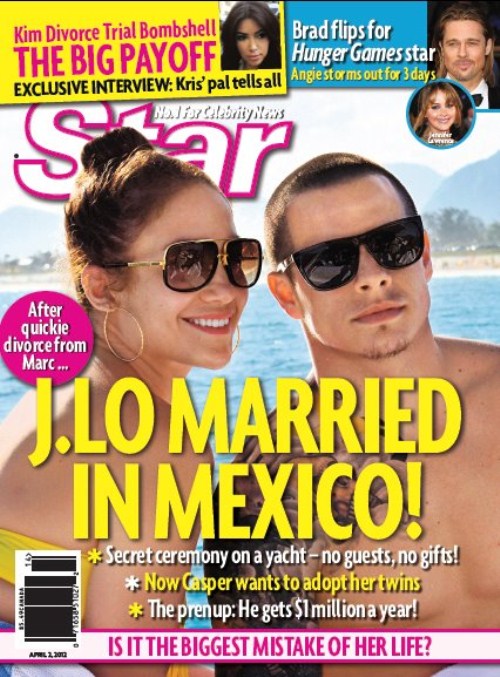 Jennifer Lopez and Casper Smart will be wed aboard a private yacht in Mexico according Star mag’s cover this week.  Casper is getting $1 million a year for 10 years in the prenup and the boytoy wants to adopt J.Lo’s kids.  Jennifer is only divorced 8 months from Marc Anthony and already she is rushing into another ridiculous marriage.  Jennifer thinks Casper is adorable and I guess that is all that matters.

Secret sources tell Star:  “Everyone in Jennifer’s inner circle thinks she’s lost her mind,” a source says. “Her mom, Guadalupe, flat out told her that marrying Casper will be the biggest mistake of her life!”

But Jen is determined to wed Casper, 24. Wedding plans are already underway, and even designer Roberto Cavalli tweeted he’s prepping for the big day.

“Today, Jennifer Lopez. Call me…She ask me. To create a special dress. For her next wedding!” he wrote on March 12. (Although his rep later claimed that someone hacked into his account and tweeted the statement, there were no other impostor tweets from the alleged hacker.)

“Jennifer called her mom, sister and a few trusted friends from Acapulco…She said that she and Casper decided to get married in Mexico. Her mom…thought they had eloped, but Jen just laughed and said it was only a matter of time.”

“Jennifer’s gut is telling her that Casper is marriage material,” a source reveals. “And there’s no talking her out of something once she sets her mind on it.”

Do you think that Jennifer will go through with this marriage?  Will it make her the laughing stock of Hollywood?  Did she learn nothing by watching Demi Moore’s happy union with Ashton Kutcher?  Or perhaps she thinks that she will beat Madonna to it…