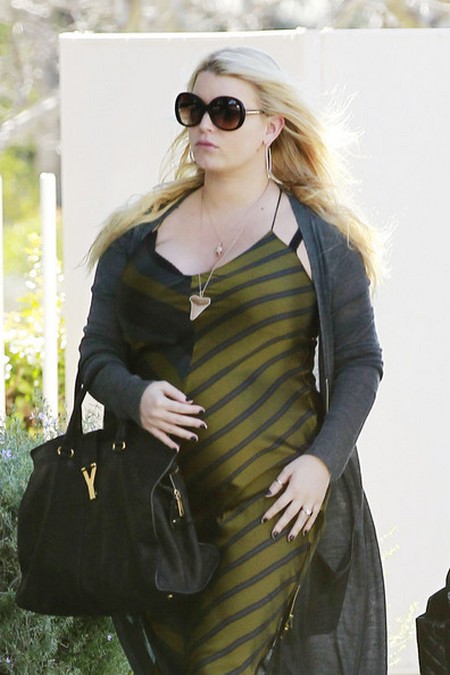 Jessica Simpson has dreamt she gave birth to a ‘Fashion Star’ contestant.  The 31-year-old singer – who is a mentor on the NBC reality show alongside Nicole Richie and John Varvatos – is expecting her first child with fiancé Eric Johnson, and admitted she was “disturbed” to have birthed fashion designer Oscar Fierro in her slumber, especially because he was wearing an “orange hat.”

Writing on her twitter page, she said:  “The most disturbing part of dreaming about birthing @theoscarfierro was that he came out wearing that orange hat!”

Jessica – who has been dating NFL star Eric since May 2010 – recently explained despite being four weeks away from full term, she looks like a “bowling ball” because of the amount of amniotic fluid surrounding her unborn baby.

She said:  “I feel like I have a bowling ball sitting on my hoo-ha!”Apparently I have a lot of amniotic fluid, so whenever my water breaks it will be like a fire hydrant!”

Meanwhile, the singer-turned-fashion designer admitted while she already sees the 32-year-old sportsman as her “husband”, they have been conducting their relationship “a little bit backwards”.

She added:  “Eric feels like my husband already, we are just doing it a little bit backwards.”