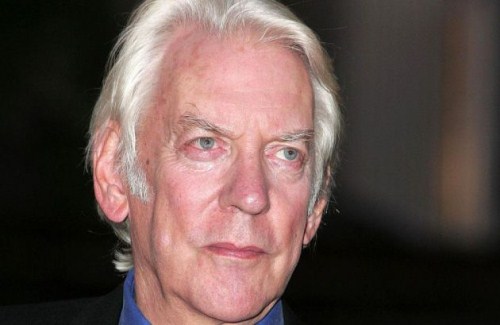 Donald Sutherland says that he had “the worst” time shooting a sex scene with Julie Christie.  The 78-year-old actor was incredibly uncomfortable working on the intimate moment for 1973 movie ‘Don’t Look Now’ because it was done in such a confined space and says the worst thing about the awkward shoot was it took so long.

He said:  “Doing it was the worst. The worst. No not really.”

We were naked, we were in a small room with the director Nic Roeg and [cinematographer] Tony Richmond and wires to engineers on the other side of  the wall, and they’ve got two unmuffled Arriflexes.”

“They were incredibly loud, those old cameras.  Nic was yelling at us, ‘Alright Julie, tilt your head to the left.’ NERRRRRRRRRRRR. It was like that for three hours.”

One shoot that Donald did enjoy was 1976’s ‘Fellini”s Casanova’ because he was incredibly close to the movie’s director.

He told Shortlist magazine:   “Federico Fellini, the great director, called me a ‘sperm-filled waxwork with the eyes of a masturbator.  “It seemed right. I loved him. He loved me. He used to direct me sitting on my knee.”