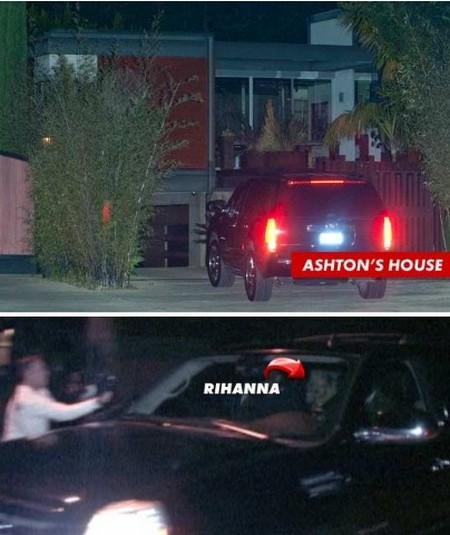 Rihanna has been spotted making a sexy midnight visit to Ashton Kutcher’s house.  The ‘You Da One’ singer visited the ‘Two and a Half Men’ star – who split from wife Demi Moore in November last year amidst allegations he had cheated on her – at around 12am on Wednesday (21.03.12), and didn’t leave until four hours later.

Rihanna, 24, arrived with her entourage at the five-bedroom Los Angeles property in a black 4×4 vehicle.

The purpose of her visit is not known officially, but Ashton, 34, is said to be moving out of the rented property soon, as it has reportedly been sold to ‘Boyfriend’ singer Justin Bieber for $10 million.

Riahnna has slept with almost everyone now – who will be next?  Do you think Ashton and Rihanna hooked up at his pad?  Let us know in the comments below.