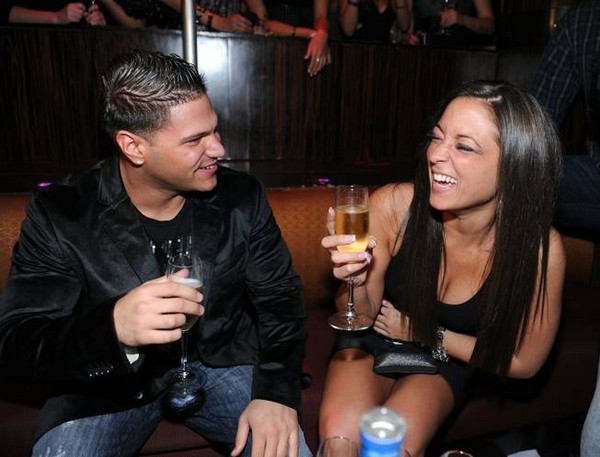 How many times have these two split now? 4,5,6? Ronnie Magro and Sammi Giancola have confirmed once again that they have split from each other due to their hectic work schedules, adding that being together while shooting scenes for the show is so much different than being away from the Jersey house due to the fact that when the cameras aren’t rolling, the reality stars still have booked appearances in different cities which makes it hard to find time for a solid relationship.

Yesterday was the final episode of Jersey Shore: The Reunion which puts the whole cast-members in a room with each other and look back at the season and what they did (this includes having to explain themselves in awkward moments such as making out with a random person) but it wasn’t until Sammi and Ronnie took to the stage to share their news that fans were quite saddened after the couple didn’t get into any fights this season.

Ronnie explained: “Right now, we’re not together. Things just got busy. I got involved in my life, she got involved in her life. I didn’t really get to see her as much. When you live with someone all the time then go to seeing them once a week, it’s kind of hard to deal with that.”

The reunion show was filmed before Ronnie, Sammi and Deena Cortese made their way to Las Vegas over the weekend for the premiere of “The Cabin In The Woods”. The ex-couple seemed very intimate with each other whilst they shared hugs and posed together for the cameras — perhaps this means that they have already made up after all. What do you think?