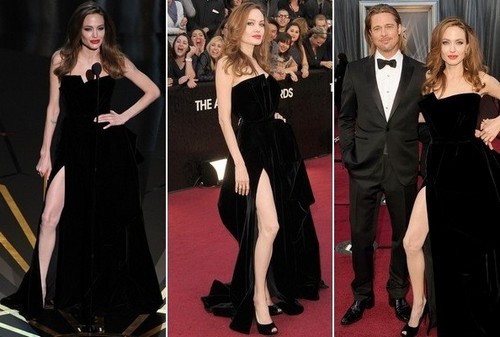 Angelina Jolie is unaware of the craze she started with her Oscar leg thrust.  TMZ reports that Angelina told HuffPo that she didn’t pay any attention to the noise that followed her rather awkward leg pose during the Academy Awards presentation.

More: Angelina Jolie’s Clothing Choice Implies That She Is Pregnant

TMZ reports:  Even though her Oscar night pose spawned its own photo trend and even its own Twitter handle … Angelina Jolie says she didn’t pay any mind to the craze known as “Jolieing.”

The woman with the most famous right leg in Hollywood tells the Huffington Post she ignored all the press following her red carpet appearance.

She told HuffPo, “I honestly didn’t pay attention to it. You know what I mean? I don’t watch those TV shows and if I go online and see something about myself, I don’t click on it. And the people I surround myself with don’t really talk about that kind of stuff … I heard something, but I didn’t pay any attention.”

More people bought tickets to “The Tourist” than believed her story.