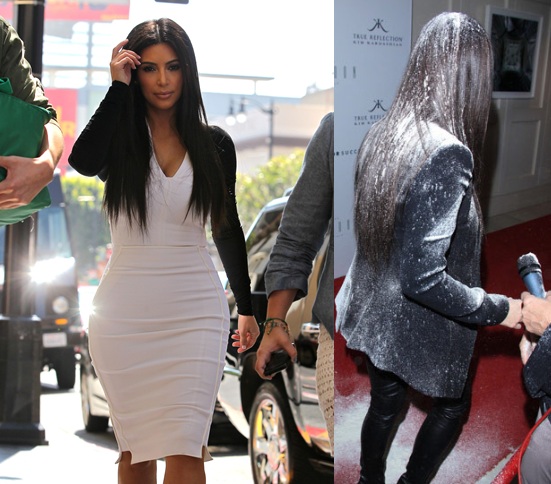 Kim Kardashian has threatened to press legal charges against her flour attacker – and she is right to do it.  Nobody has the right to assault anyone unless it is in self-defence.  Kimster was attacked by a flour bomb on Thursday while she was posing for pictures at the London Hotel in Hollywood.

More: The Kardashian Sisters Are Humiliated By Their Lovers

Even though Kim, 31, shrugged the attack off at the time, Kim is having second thoughts:  ‘That’s not okay and that’s bullying and I don’t promote that but I just had to laugh it off’.

Reports suggest that the woman, who is yet to be named, attacked the star because she wears fur.  Now Kim has responded to the claims:

‘Whatever your beliefs are – if you’re trying to promote non-violence towards animals, then why are you being violent towards humans? I think there are other ways around it.’

Kim may now be considering legal action and has since increased the security around her:

“I don’t want someone to think they can really get away with that. I’m gonna definitely deal with it because it is not acceptable. Now that I think about it and had some time to digest it, I think, ‘What if that was some other substance? What if that person had a dangerous weapon?”

Kim is right on.