Angelina Jolie Wasn’t Aware Of How Much Attenion Her Leg Received: ‘I Didn’t Pay Attention To It’ 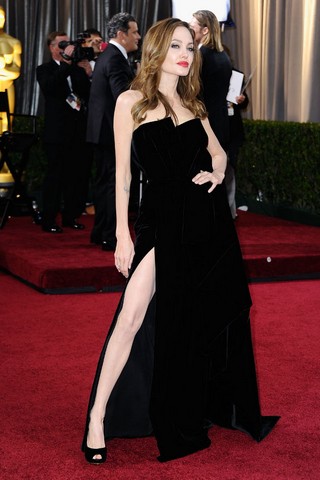 Everyone were talking about Angelina Jolie last month at the Oscars and after the show after the actress showed up in a black dress whilst flashing her right leg to the cameras. Soon after her appearance on the red carpet, the images went viral and everyone in the world were talking about it.

Twitter named Angelina the trend of the day as the Oscars aired, another person created an account on the social-networking site naming it, ‘Angelina’s leg’ which attracted 11,000 followers whilst graphic artists photoshopped creative ideas with Jolie’s leg in every picture — everyone were buzzing about ‘the leg’.

However, speaking about how much attention she received about showing off her leg on the carpet, the actress revealed that she didn’t pay attention to it because she doesn’t watch a lot of TV and doesn’t read what people say about her on the blogs. She revealed to The Huffington Post: “I honestly didn’t pay attention to it. You know what I mean? I don’t watch those TV shows and if I go online and see something about myself, I don’t click on it.

“The people I surround myself with don’t really talk about that kind of stuff. I heard something, but I didn’t pay any attention. It’s as simple as a being a woman picking a dress you like and having a night, and not really thinking about anything else.”