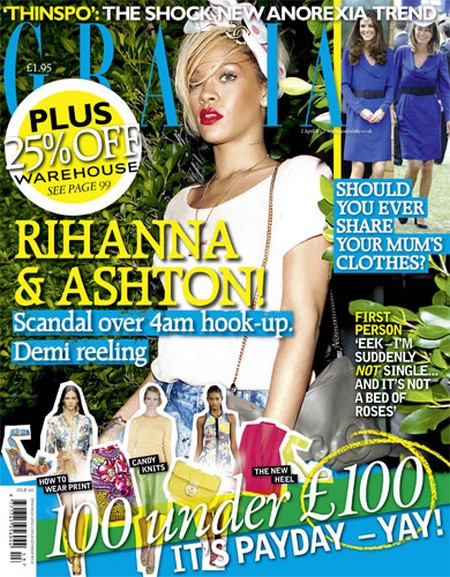 Demi Moore is ‘sick to her stomach’ over Rihanna hooking up with Ashton Kutcher.  The news of Rihanna’s midnight love-in with Ashton has really upset Demi and she is acting like a crazy woman (what’s new?) according to a source at Grazia magazine.

Since her now infamous late night booty call, it has emerged that Rihanna has been seeing Ashton for the past two months!  Demi is killing herself with jealousy and shame according to her pals.

The source told Grazia magazine:  “Demi is constantly keeping tabs on Ashton so when these pictures came up she was understandably devastated. Demi’s convinced something happened between them and said she felt ‘sick to her stomach.’”

‘Demi’s been acting crazy ever since, trying to find out information about the pair.  Demi is in such a fragile state, even the idea of them together has affected her quite badly.  She’s in a terrible way but, at the end of the day, Ashton is a single man and free to do whatever he likes.”