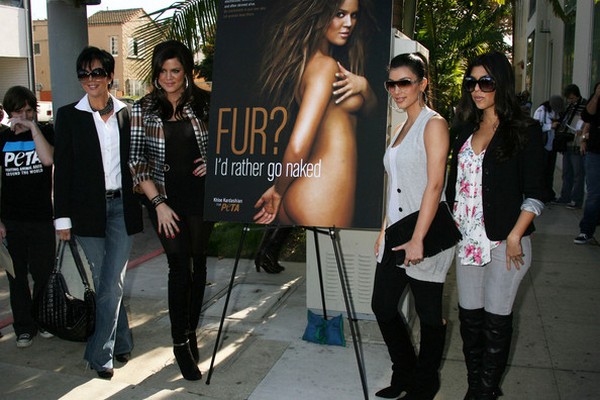 Khloe Kardashian – who also posed nude for the campaign in 2007 – has said on her blog that she no longer supports the People for the Ethical Treatment of Animals (PETA) organization for ‘bullying’ her older sister, Kim Kardashian after throwing a bag filled with flour on the reality TV star’s head which left her humiliated. According to sources, the woman who did it worked for the company and wanted to get her message across due to Kim’s constant choice to wear fur (despite working with PETA in the past).

“I’ve been a vocal supporter of PETA for a long time but I have also been very vocal about anti-bullying, so this was a huge disappointment for me,” Khloe continued on her blog. “As you all know, I don’t condone violence and bullying and what happened last Thursday was just that. I am absolutely disgusted by their behaviour.”

Kardashian continued: “Everyone is entitled to their own beliefs and opinions – I personally don’t wear fur but that doesn’t mean I am going to force my views on anyone else, ESPECIALLY by violating them.

In the final paragraphs on her blog, she adds how she’s proud of how her sister handled the situation and wants to let her fans know that she will continue not to wear fur and raise awareness to it but she will not be supporting PETA: “I am a very proud sister right now, because Kim handled last week’s incident like a champ. She got cleaned up and was back out there in a matter of minutes. Go Kimmie!”

“We all need to practice what we preach. I will still continue to NOT wear fur, but I will no longer support PETA. Bullying and harassment is NEVER a solution, and I won’t be a part of any organisation that thinks otherwise,” she vowed.