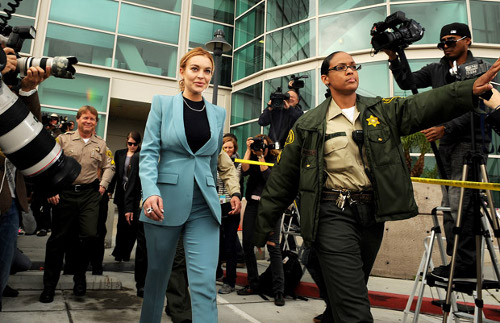 Lindsay Lohan returned to court recently to have her final meeting with Judge Stephanie Sautner, who ultimately terminated her DUI probation. But just hours after the judge told LiLo to halt her partying ways, she threw a gigantic party at Chateau Marmont. The party allegedly went into the wee hours of the morning and alcohol was being served . . . though, LiLo was not seen drinking — which is a good thing!

Along with the termination of her probation, the Judge told Lindsay:

“The only terms left are to obey all laws, and that’s not that hard. I know it’s hard when people are following you, but that’s the life you chose. You know what you need to do. You need to live your life in a more mature way, stop the nightclubbing!”

Lindsay said she wanted to throw the party to thank all her friends, family, and other people who’ve given her so much support through her tough legal battles. Again, LiLo wasn’t seen drinking, but partygoers said the party was a party.

Is LiLo just opening up a can of worms here? Will this relatively mild night out lead to more wild ones?

Let us know what you think!