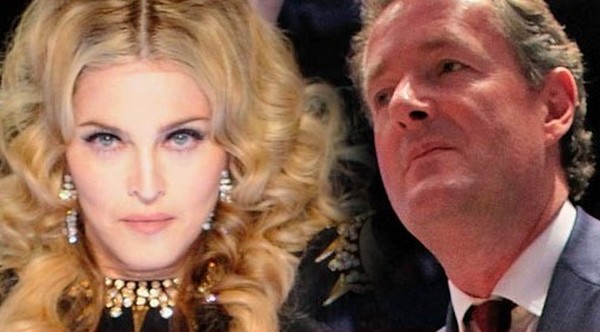 Piers Morgan hasn’t kept quite about his constant bickering about Madonna. Morgan who has not publicly revealed why he dislikes the singer so much, has been mentioning her name ever since landing his own show on CNN where he said he would not have Madge on his show because he has officially banned her.

Earlier this week, whilst Madonna promoted her latest album, MDNA, for one day on Twitter, Piers tagged Madonna and said she’ll still not be allowed to make an appearance on his show: “Madonna’s only been banned from my #CNN show @guyoseary – not my UK show, which sent that invite. But I’m now banning her from that too.”

Everyone has been wondering why Piers is so mad at Madonna. Although he doesn’t actually reveal much, he says he will forgive her IF she bends down on her knees and says she’s sorry.

TMZ caught up with Morgan this past week and asked him on his hatred against Madonna where he said it’s a “private spat” he didn’t want to reveal but he does say: “Madonna can come on [my] show, but she has to get on bended knee and apologise to me.”

We’re not so sure Madge would want to be on Piers Morgan’s show anyway! Why? Piers’ show has been going down in ratings over the past month. To be more specific, he’s ratings have gone down by 40% so for Madonna to come on his show would be a ratings booster for him. What do you think?