Salma Hayek Is Forced To Dress Up For Her Billionaire Husband 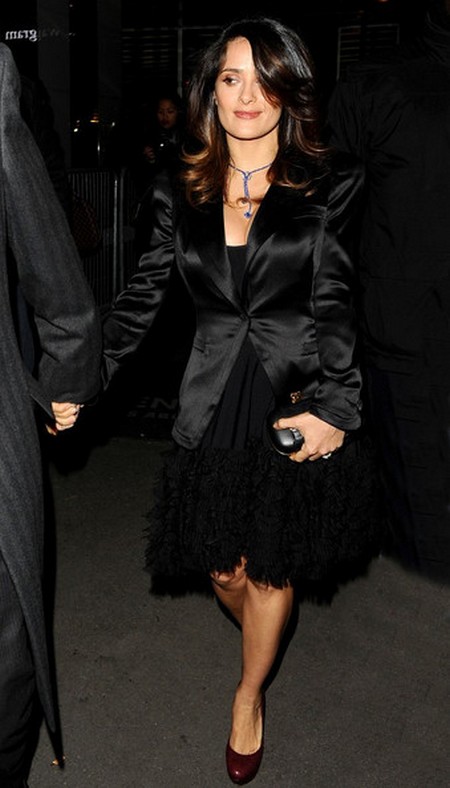 Salma Hayek likes to dress up for her husband and since he is a billionaire she really has no choice!  I mean business is business…  The ‘Grown Ups’ star married French billionaire François-Henri Pinault in 2009 and enjoys trying out new looks in a bid to catch her other half’s eye.  This is nice way of saying that money talks.

Salma said:  “If you’re in love with someone, you always want to conquer them anew. Even if we don’t go out, I like to look nice for him.”  “He inspires me. There are men who don’t notice what you’re wearing, and that’s cool. But when you make an effort, François appreciates it so much.”

The couple now live in Paris with their four-year-old daughter Valentina, although Salma admits she is regularly blown away by the standards of style on the French capital.

She told Lucky magazine:  “It’s nuts, how good the people look. Nobody’s overweight, everybody’s well dressed, no tennis shoes – somehow, even though they walk all over the place, everyone manages to wear real shoes, nice shoes.”

Modelling a low “Parisian” ponytail, the 45-year-old actress reveals her husband much prefers her hair in its natural state.

She explained:  “My husband, it’s funny, but he hates it when I have this Parisian hair! He loves my crazy-maniac-madwoman just-got-out-of-the-shower hair. He is like the lawyer for my thick, wild, natural hair. He’s like, ‘Why make it suffer?’   “But you know for 45 years I’ve got this big hair, and these big boobs, and I’m this tiny person and sometimes – you just want to be … smaller.”

What a load of nonsense.  Salma married for money and she is now the trophy wife of a plutocrat and does whatever he demands.