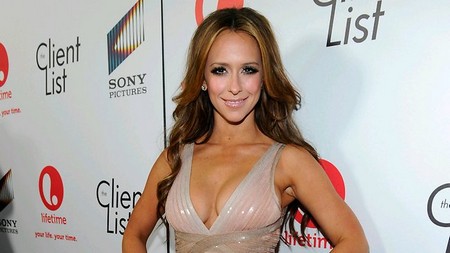 Jennifer Love Hewitt will soon be seen in her new television series for Lifetime The Client.  Jennifer recently revealed that she took pole dancing lessons to prepare for her role as a raunchy housewife-turned stripper Samantha Horton in the show.

In most of the trailers for the show she is wearing a black satin dressing gown open to reveal a black plunge bra.  Now editors of magazines have had her cleavage digitally reduced in an advertisement for the show as well as further covering them with elements of her gown

However, it seems that baring all doesn’t seem to bother Love Hewitt too much. She has revealed: “I’ve learned how to wear lingerie better – sort of how to get into it faster, all of those things.  Being so overtly sexy and provocative, that part of it is not something I’ve really put out there before.  And it has been fun and exciting.”