Is Miley Cyrus An Anorexic Or Just A Spoiled Brat (Photo) 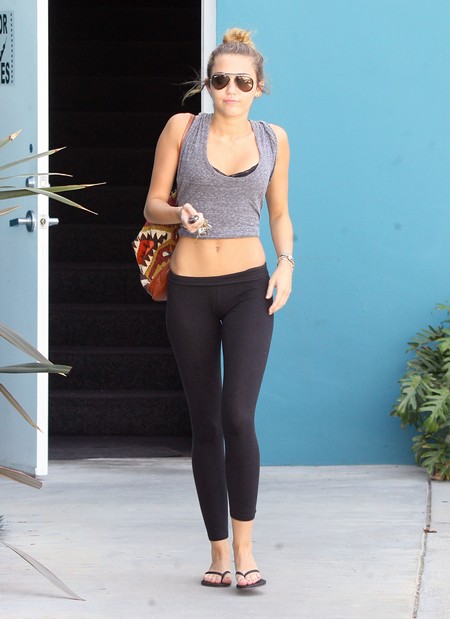 Miley Cyrus has become the worst attention whore in Hollywood recently and it is truly disgusting.  She hollers her denial loudly about the recent reports that she is anorexic but we don’t believe her gluten allergy and lactose intolerance lies.

Miley will use any means at her disposal to gain attention now that boyfriend Liam Hemsworth’s success is outstripping her own.

The more successful Liam gets, the worse Miley’s behavior gets.  See the pattern?

Apart from her absurd engagement ring Twitter stunt Miley has been acting up and her most outrageous gimmick was flashing photogs her bare naked crotch as she left the gym last week.

We cannot post the picture here because it is NSFW (to say the least!) but we can give you the link.  Warning NSFW (PHOTO HERE)

MILEY Cyrus has furiously hit back at claims she is starving herself to stay thin.

The singer/actress, 19, sparked fears last week when she was snapped looking skinny as she jogged with her dog in California.

She fuelled speculation when she posted a photo of herself smelling, but refusing to eat, fast food on Twitter.

Miley wrote: “I can’t eat it. So I’m just gonna smell the s**t out of it! My mouth is literally watering.”

Her upload triggered a torrent of accusations that she has turned to extreme dieting to keep the weight off.

However, she’s been quick to lambast such claims, insisting her fast food snub was due to medical and health reasons.

She tweeted: “For everyone calling me anorexic I have a gluten and lactose allergy. It’s not about weight it’s about health.

What do you think is the skinny on Miley’s anorexia?  Let us know in the comments below.