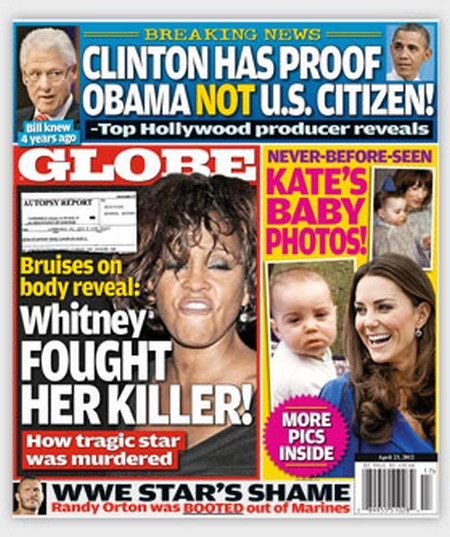 We got our hands on the new cover of Globe Magazine and it is a whopper.  Screaming across the cover in white ‘Whitney Fought Her Killer.’   The magazine claims they have all the details on how the tragic star Whitney Houston was murdered. The magazine has documents that reveal bruises on Whitney’s body and how these bruises prove that Whitney fought her killer.

Globe’s story: A bombshell autopsy report reveals Whitney Houston courageously fought for her life against her ruthless killer before being drowned in her hotel bathtub, say experts. Learn about the wounds that Whitney suffered and why experts like TV’s Dr. Drew Pinksy say the temperature of her bath water is a key clue to murder – only in this issue of GLOBE.

There you have the story, interesting…..  your thoughts?