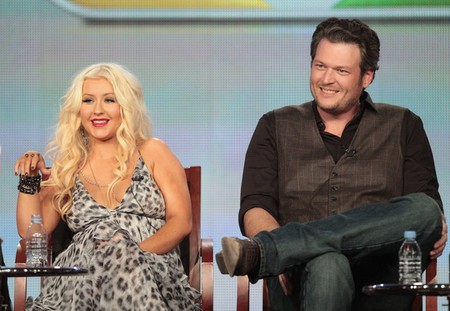 We have been hearing rumors that The Voice’s Christina Aguilera is having a good old time flirting with Blake Shelton.  The flirting has gotten so bad that apparently Blake’s wife Miranda Lambert has noticed.  It seems The Voice coaches love to party and Blake and Christina are having a good old time partying and flirting and they are starting to raise some eyebrows.  Add to all this Christina has started to lose some of the weight she put on and since Miranda married Blake, she has started to pack on the weight.  This has only added to Miranda’s jealousy of Christina.

From The Star Print edition: “Christina is constantly coming on to Blake, and he just eats up the attention she’s lavishing on him.  It doesn’t help that they drink together on set. They slip into each other’s dressing rooms and lock the door behind them. Then they’ll come out an hour later, all giggly and touchy-feely.  There are a lot of whispers going around on set about their relationship and Miranda thinks they’re getting way too close for comfort. She’s steaming mad!”

“Miranda knows he’s had a crush on Christina since her ‘Dirrty’ days, even to the point where he once joked that she would be his choice as ‘free pass’ if he could hook up with her.  I don’t think that bothered Miranda back then, but now she’s definitely uncomfortable with the thought of them working together so closely.”

Rumor has it Blake has been trying to smooth things over with Miranda before the situation gets too explosive.  Christina better be careful because Miranda can be all kind of crazy.  Miranda has been vocal about her anger and disgust towards Chris because he beat up Rihanna.  She went really far at a recent concert and made a comment about her daddy teaching her how to use a shotgun.  If I were Christina I would back off fast.  So there you have the story!  What do you think?  Hit the comments and let us know!