DWTS Derek Hough Has A Huge Crush On Katherine Jenkin 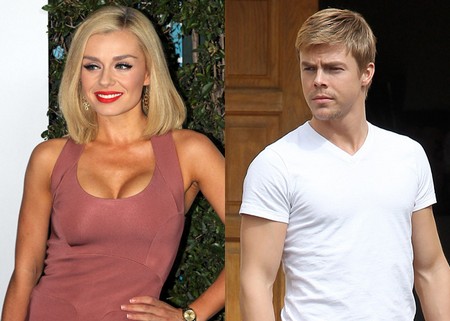 Derek Hough has apparently fallen head over heels for his ‘Dancing With The Stars’ co-star Katherine Jenkins.  But having just broken up with fiancé Gethin Jones in December, Katherine still isn’t in the right place to start a new romance, much to Derek’s disappointment.

A source told The Sun newspaper: “He loves how down-to-earth she is. He said she was over at his condo last week and didn’t have a scrap of make-up on and drank a beer.  She isn’t ready for dating after her split with Gethin Jones, though it hasn’t stopped him being completely besotted.”

Katherine was also previously linked to her professional dancer partner Mark Ballas, but insisted the claims were unfounded.
She said of the rumours: “It’s inevitable but it’s just complete nonsense. We have totally hit it off and we’re having a great time. But he came to London to start training me and within – I think within 12 hours – is all it took before there was that first photo and immediately we were of course dating, which it’s not true. He has a girlfriend and I’m not ready, I’m not ready for any of that yet. I’m just going to concentrate on the dancing.”