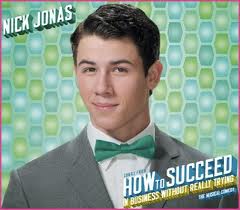 Nick Jonas is off the market again! The studly Jonas brother was caught kissing a mystery girl while on a date in New York City at Beauty & Essex Wednesday, April 18.

According to an eyewitness for Hollywood Life:

“Nick came in to the restaurant with a really pretty brunette.”

“They were clearly there on a romantic dinner date and ate lobster tacos and pot de crème, as they snuggled up in a booth.”

“At one point, Nick was feeding her a lobster taco and had his arm around her while they looked at the menu. He definitely took the lead and ordered for them both.”

“They were so intimate, they shared a few pecks here and there.”

Up until February, Nick, 19, was in a serious relationship with Australian pop star, Delta Goodrem, who was eight years his senior. This spring, we saw Nick in a Broadway show we enjoyed very much, How to Succeed in Business Without Really Trying.

Who is the mystery woman? Let us know in the comments below.