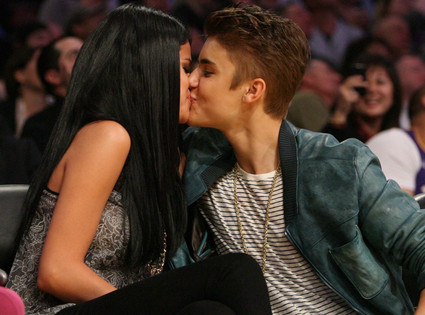 Selena Gomez’s Kiss Camera kiss with Justin Bieber was all over Staples Center during a Los Angeles Lakers game Monday night.  Poor Selena says it was “the most humiliating thing that’s ever happened” to her.  Selena should consider herself lucky that it was Justin who kissed and not Kobe Bryant – who wasn’t playing that night.  Now THAT would have been humiliating!

Selena and Justin were taking in the game when they appeared on the court’s Kiss Cam – which zooms in on couples to make them lock lips – and although they complied, Selena was enormously embarrassed.

Selena told host Ryan Seacrest on his KIIS FM radio show:  “It’s the most humiliating thing that’s ever happened to me, probably.  They were showing these little elderly couples, and it was so cute. Then all of a sudden we’re both looking up and we come on the screen and it’s like… It was so awkward.   It was so weird. I mean you have to kiss, right?”

No Selena, you don’t have to kiss.