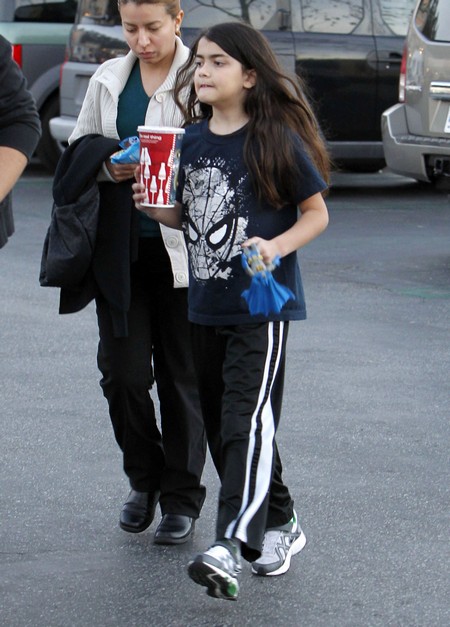 The former bodyguard of Michael Jackson’s, Matt Fiddes, is claiming that he is Blanket’s biological father and he wants his son back.   Prince Michael II, which is Blanket’s real name, bears a serious resemblance to MJ.  But of course who knows exactly what MJ really looked like anymore – after all his cosmetic surgery.

Matt has been making claims about Blanket’s true parentage since 2009 and claims that in 2002 Michael requested a sperm donation from him in order to produce a ‘sporty’ child – and Matt went ahead and donated the sperm.  Matt previously claimed that it was Mark Lester who told him that the child was his but now Mark has become MJ in Matt’s tale.

Matt is willing to provide a DNA sample to make his case for parentage.  Matt says he wants no money – just love: “All I want is access if he’s my child, to take him out, and spend some time together. My mum is dying of cancer. I want her to see Blanket more than anything.”

The martial arts expert has long claimed that he gave a sperm donation to the superstar singer in 2002, because he wanted a ‘sporty’ child.

In an interview, he claimed the King of Pop, who died in 2009, told him the child was his.

He said: “I sat there and asked the question: ‘Is Blanket my child?’ He said: ‘He’s my child, Matt, but I used your sperm to produce him.’”

But the new claims contradict previous interviews when he said he was only told the boy was his son by Michael’s long-term friend Mark Lester.

In August 2009, he reportedly said: “Michael never told me himself that Blanket is my son but he took my sperm and the child is the spitting image of me.”

The 32-year-old, who has three other children, plans to file papers in Los Angeles after his attempts to contact Jacko’s family failed.

He believes his efforts to gain access to the youngster are being blocked by their grandmother, Katherine, who has custody of the children.

What is your opinion?  Is Matt really Blanket’s biological father?  Tell us what you know in the comments below.