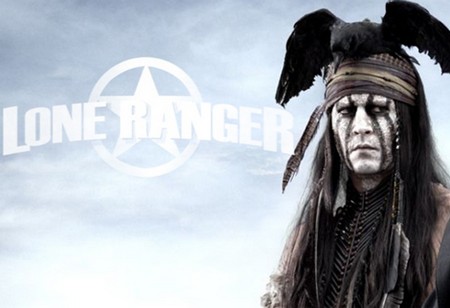 If you are in any way familiar with the look of Tonto in the TV series ‘The Lone Ranger’, you’re in for a big surprise with what Johnny Depp has done. Depp looks nothing like the original in any way possible. But in a new interview with Entertainment Weekly, Depp revealed what inspired him for the new design of Tonto.

Depp was inspired by a painting by Kirby Sattler called ‘I Am Crow’, which has also been officially licensed for the film, Depp says, “I’d actually seen a painting by an artist named Kirby Sattler, and looked at the face of this warrior and thought ‘that’s it’. The stripes down the face and across the eyes… it seemed to me like you almost see the separate sections of the individual, if you know what I mean.”

In my opinion the new design of Tonto looks pretty bad ass, but there’s one question, why is there a bird on his head? Depp says, “It just so happened Sattler had painted a bird flying directly behind the warrior’s head, it looked to me like it was sitting on top. I thought ‘Tonto’s got a bird on his head’ It’s his spirit guide in a way. It’s dead to others, but it’s not dead to him. It’s very much alive.”

It looks like to me that this movie looks incredibly interesting; I’m actually planning on seeing this. Since one, Johnny Depp is an awesome actor and two; I’ve never seen the originals so it might inspire me to do so.