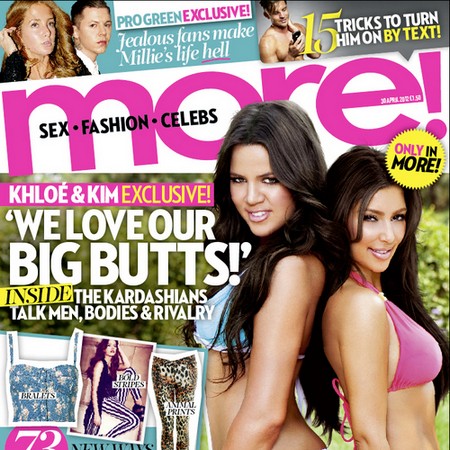 Khloe Kardashian has had a weight problem for a number of years, and while she isn’t too worried about her stomach and arms, she envies her sister Kim’s boobs.  She told more! magazine: “We have such different bodies. But do they have body parts I wish I had? Yes! I wish I had Kim’s boobs. I do have issues with my tummy and my arms, but you can always tone them up.”

Khloe admits she was “lazy” following her wedding to the basketball star Lamar Odom in 2009, which came after just 30 days of dating, but she is now “working really hard” to tone her body.  She added: “I think, when I got married, I got lazy. Lamar and I had a phase where all we would do is lay with each other and do nothing.

“I’m working out really hard right now. I’m trying to tone up. My weight has been a life-long struggle and I have to work so hard to stay in shape.

“Boxing is the best. I love knowing I’ve burnt a million calories.” Khloe regularly faces “horrible” criticism for her weight, but in the past five years she has learned to ignore offensive comments aimed at her.

Of course she has – all she had to do is have the magazine photoshop her body.  Does she really expect us to believe that is her body.  It looks like they took a head and stuck it on someone’s else body.

She explained: “I’m the ugly sister. I’m the fat one. I’ve had those things said about me at least twice a day for the last five years.  It’s horrible, but I can brush it off.”

Boo hoo, I am not feeling sorry for her at all!  Are you?  Hit the comments and let us know!