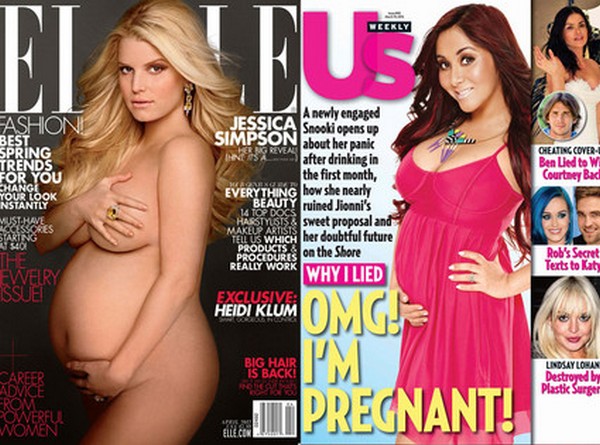 Snooki, real name Nicole Polizzi, has said that she would die if she was to ever get as big as Jessica Simpson during her pregnancy after seeing pictures of Jessica’s enormous stomach (not to forget she’s not carrying twins). Snooki who signed up for another season of Jersey Shore last month spoke to UsWeekly on her thoughts on pregnancy and joked when J-Simpson’s name was mentioned:

“I’m so skinny that I can wear larges or extra larges. I only just bumped up to a medium. I’m five months and you can’t really see anything. It’s gonna pop up in like a week. I would die if I were her [Jessica Simpson] size.” She continued: “She said she indulged in everything that she wanted. I’m trying to eat healthy – fruits, lots of jelly and Italian ices. Nothing fattening at all.”

Nicole will be joining the rest of her castmates back at the Shore house over the summer as MTV cameras will shoot its next season despite the fact that Polizzi will be giving birth right around that time too. But, we can already guess that this is going to get big ratings and a bigger paycheck for the reality TV star. It seems that money really does do the talking.

Meanwhile, Simpson is expected to give birth any day now. According to talk-show host, Wendy Williams, Simpson has already given birth but is waiting for a magazine deal to exclusively share pictures of the newborn baby. Pathetic or smart decision? What do you think!?