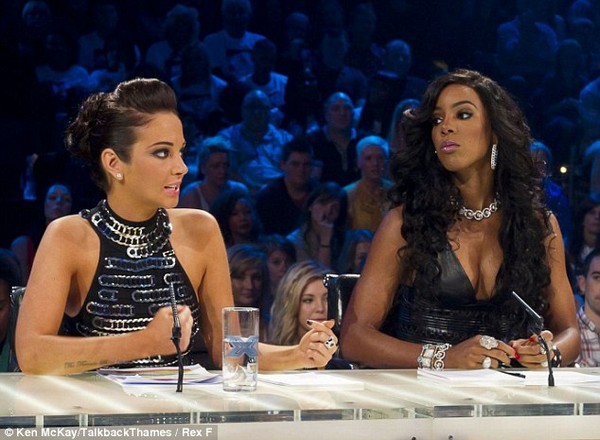 Earlier this week we reported that Kelly Rowland‘s chances of coming back for X Factor UK’s next season (which is starting its auditions next week) were very unlikely since Rowland had demanded a $1m increase to her $500,000 salary which she received for season one. We had our doubts that Simon Cowell would change his mind and we were right. Earlier today, Kelly’s team revealed that the singer will not return to the show since she and the producers couldn’t come to some kind of arrangements.

“After much speculation, we can officially confirm today that Kelly Rowland has decided not to return as a judge again for this year’s UK X Factor,” her spokesperson said earlier today. “Global commitments coupled with the show’s increasing demands this year mean that, despite weeks of deliberation with the show, Kelly has not been able to agree a deal that fits into her autumn/winter schedule, so sadly cannot accept a place on the 2012 panel.”

“Kelly thoroughly enjoyed her role as a judge on the show, but felt that if there couldn’t be a workable solution to scheduling issues so that she could effectively juggle her other commitments then she couldn’t wholeheartedly commit to the show this year.”

According to close sources to the show, producers and Simon refused to give Rowland the extra cash since she didn’t connect with the audience as well as they had hoped; she didn’t understand the humor of the British public, missed one week of filming and four days mentoring her acts to shoot her music video in Paris which caused a lot of confusion and stress to the production team.

However, in Kelly’s statement, she says she enjoyed her time on the show and thanks Simon for giving her to opportunity to be part of the X Factor in the first place: “I love the UK and being part of the show last year. Mentoring the girls was such an incredible experience I will never forget. I would like to thank Simon for the great opportunity and asking me to be a judge last season.”

It is now believed that Dannii Minogue will return to the show since she was a popular judge but no word if she’ll actually consider coming back after being ‘publicly humiliated’ in Simon’s latest biography which revealed that Dannii had a secret affair with Simon when she first joined the show in 2007. Whether or not Minogue comes back, there’s only a week left for producers to try and sort something out.