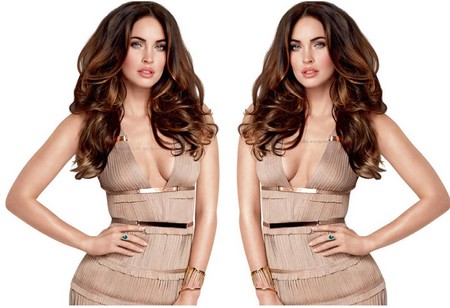 Wow! We think it’s fair to say that she really is pregnant. Last month, we reported that Star magazine claimed Megan Fox was expecting her very first child to Brian Austin Green despite not having gone public on it — the tabloid mag claimed that Fox had wanted to keep it a secret until her belly starts to show. However, in a recent interview the actress had with ET, it pretty much gave away that she was pregnant after her publicist cuts off the question while Megan couldn’t contain herself as she giggled away.

Interviewee, Steve Jones – remember him? – took the interview and seemed to do pretty well as she sneaked in the question, leaving The Dictator star puzzled on what he was talking about before she realizes he was asking if she is carrying a baby.

“Do you know the ultimate gadget that every man wants? A baby,” Steve asked Fox. Megan then replied saying: “A baby? Oh, I know where you’re going with this?”

Jones tried to dig for the dirt as he said: “You hear the grumbles… No, no.”

Megan’s publicist cuts in and tells Steve to end the interview before adding: “Either way, Megan, it was a pleasure talking to you.”

Being the nice man that he is, Steve later felt an apology was needed to be said because it surely didn’t seem like Fox was prepared to be hearing a ‘Are you pregnant?’ question so soon. Fox is currently promoting, The Dictator, starring Sacha Baron Cohen.

“I’d like to formerly apologize to Ms. Fox for attacking her with the word baby. Thankfully, there was a publicist there to stop me,” he said.

Watch the video below!!