Cheryl Cole Admires Rihanna’s Confidence: ‘She Doesn’t Care What People Think About Her’ 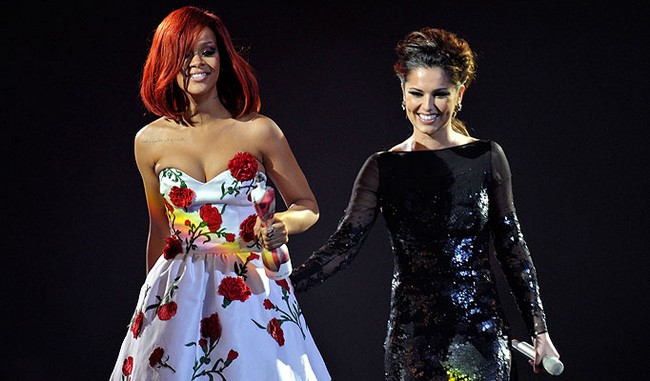 Cheryl Cole loves Rihanna – yes, we mean love! The British singer who recently admitted to having a girl crush on RiRi, says that she is the perfect pop star because she has the star quality that outshines all the others. “You know what I love about Rihanna? I know she gets a lot of criticism, too, about what she wears and what she sings about, but she is so free,” she explained. ‘She doesn’t give two f**ks. I love that in her. I love that sense of freedom about her. She’s gorgeous and free. A perfect pop star.”

The two who have become very close friends – since Rihanna was a regular performer on the UK version of X Factor where Cole was a judge. While attending The Brits back in February, Ri was supposedly seen with Cheryl in the studio to record a song for her upcoming album – set to be released in June, after her single, Call My Name drops a week before. Cheryl added:

“Maybe it’s going through everything she’s gone through that has enabled her to get to that point. She’s like, ‘Whatever. What more can you say about us? You can’t hurt us any more’. I love that about her. It’s liberating. She’s liberal.”