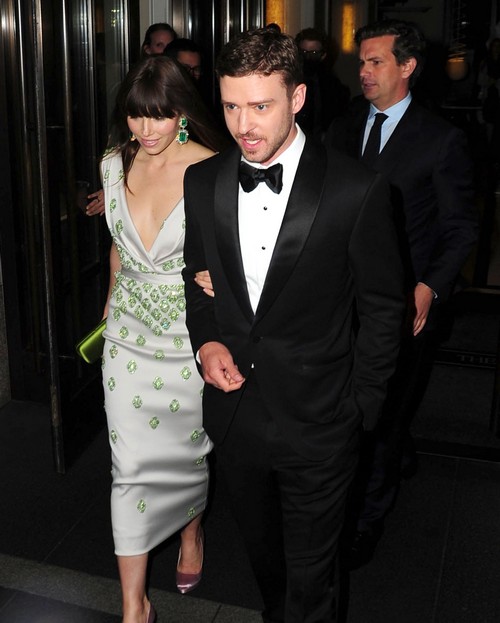 Justin Timberlake has had it up to here and wants out of his wedding with Jessica Biel.  Sources close to Justin spill on the reasons the marriage is not going to happen.  Friends say that Jessica forced Justin into proposing but nevertheless he is not ready for marriage.

The list of problems starts with Justin’s famous wandering eye and womanizing ways.  Justin has trouble staying faithful!  Justin has had affairs with many Hollywood celebs in the past, including Rihanna, Scarlett Johansson and Olivia Munn.

“For one thing, he loves women,” says a friend of Justin’s.  Justin reportedly hooked up with his Friends With Benefits co-star Mila Kunis last year, although both deny it – “He loves flirting with girls,” says a buddy of his.

The pal continues: “I’ve known Justin for 10 years-I think he wants to be a faithful husband, but I don’t see him actually doing it.  In a perfect world, he wants a wife and family, but I’m not sure he can really handle it.”

Another big problem is that Justin fears commitment – let’s not forget that when things got too serious between Justin and Cameron Diaz after four years of dating, he bailed on the relationship.

Jessica’s dream of walking down the aisle may be crushed forever.

“She got back with Justin thinking she’d finally become his wife,” says an insider close to the couple. “If there’s no wedding, Jessica will be devastated.”

Not expecting the worst, the bride-to-be spent April 6 in Paris searching for the perfect wedding dress. But Justin’s still got some wiggle room: while the wedding is scheduled for late summer, no date has been announced. In fact, as Life
& Style previously reported, friends and family have been given very few details about the nuptials so Justin could easily postpone the wedding-or cancel it altogether.

Besides the fidelity issue, Justin is also consumed with his work: he’s in Atlanta filming Clint Eastwood’s ‘Trouble With the Curve’ and has several more films lined up. “He’s so focused on his acting career right now,” notes the pal. “He’ll be on the movie sets for years.”

What is also standing in Jessica’s way of getting her happily ever after? Justin is very attached to his mother, Lynn Harless.  According to one report, Jessica, 30, finds Lynn overbearing and feel she should take a step back from Justin’s life.  “Before they were even engaged,” says a second insider, “Jessica always felt it was a marriage of three: her, JT and JT’s mom.”

So it her gut, Jessica may no wedding just isn’t in the cards for her and Justin. Even after they reunited in 2011, she didn’t sound too hopeful about getting married one day, confessing. “I was never one of those girls who dreamed of my wedding and my Prince charming.”

Do you think Justin and Jessica will make it to the alter?  Let us know in the comments below.